COLLWEB is a global network of collectors that builds a community of people who appreciate the value of art, cars, watches and real estate. 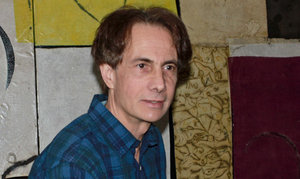 Born in Paris, I graduated in Science, then moved to a secluded hamlet in the Alps mountains where I converted a barn into a studio. I stayed there for 8 years, also traveling extensively to developing countries.

I started modeling slabs of plaster, engraved with imaginary signs, a work induced by ruins of early civilizations I had crossed. Much closer to my studio, the Art Brut Museum in Lausanne, would also stir a lasting interest. Ancient glyphs, enigmatic signs of disabled artists compelled me in a similar way, by blending a sense of beauty and mystery.

Michel Alexis was awarded the Pollock-Krasner grant (1994), and the Elizabeth Foundation for the Arts grant (2003). His work has been reviewed in the New York Times, Art in America , Artnews and numerous other publications.

He has exhibited work at the Los Angeles County Museum, the Bronx Museum, Dortmunder Kunstverein, Musee Dauphinois, Denver University, Rhode Island University, the Daum Museum among other venues. Meanwhile he has been represented by the Stephen Haller Gallery in New York, Ruth Bachofner gallery in Santa Monica, Boyd Satellite gallery in New Orleans and Isabelle Gounod in Paris.

His current show “Reinventing Nature” is on view at the Tree Art Museum in Beijing, from October 15 to December 15, 2019.